What is Difficulty bomb Print

As we know Ethereum Mainnet was launched in mid 2015 by one of the pioneers of the industry Vitalik Buterin and his team. When the Ethereum network became popular they encountered the issue we are well aware of - transaction speed in the network wasn’t fast enough which resulted in higher gas prices and huge frustration from the network users. The Ethereum developers proposed switching the network to Proof-of-Stake (PoS) system to speed up the time of block validation and thus transaction speed and to improve the overall stability and security of the network.

The code activating the difficulty bomb was first introduced to the Ethereum network in 2015. The idea is pretty straightforward – to force the users of the old Ethereum nodes (GPU and ASIC miners) to accept the Ethereum 2.0 PoS transition (known as the “Merge”) and subsequently drive the adoption of the Proof-of-Stake (PoS) chain.

If they fail to update the nodes to the latest version, after Ethereum 2.0 (PoS) the old 1.0 (PoW) node owners will be receiving significantly less rewards due to the increased network difficulty. The block time could be more than a few hours or no blocks at all.

This graph shows the average time of the block with links to the key Ethereum network updates.

If the old (Ethereum 1.0) nodes remain active after the PoS it can cause problems for many of the Ethereum based products such as exchanges, DEXes, DAOs etc because the chain subsequence will be ruined. Difficulty bomb aims to prevent such disturbances in the network.

Difficulty bomb is a piece of code which activates the mechanism that increases the block time based on the exponential principle i.e. every block time increase will be twice as long as the previous one.

The block finding time is scheduled to increase every 100000 blocks.

The first update activating the difficulty bomb added 0.18 seconds to the average time of finding the block, the next one added 0.36 seconds, the following one 0.72 seconds etc. You can see on the graph the percentage of the average block time increase. This decreases the miners income proportionally. 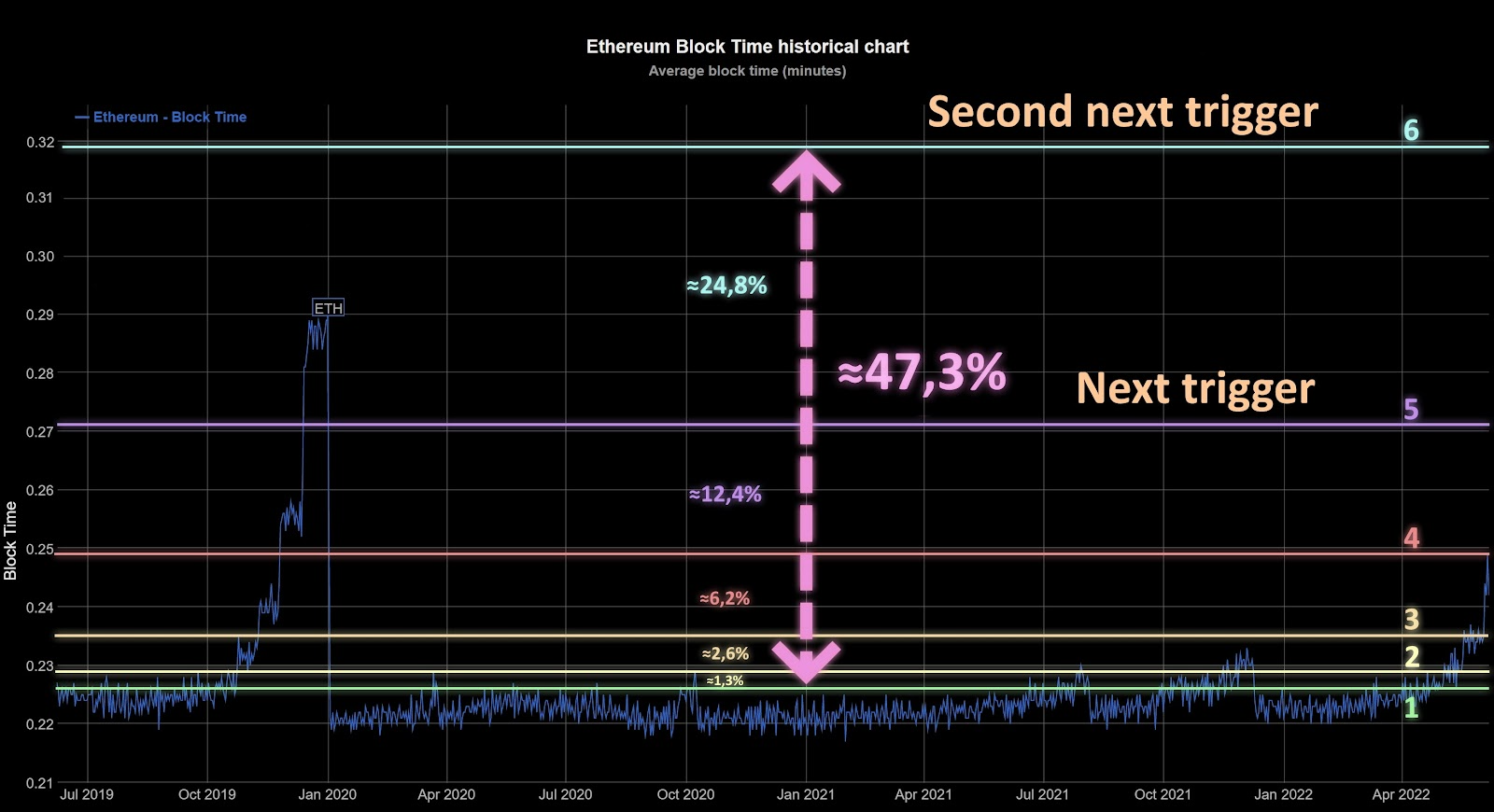 The Ethereum Grey Clacier update is now live on the mainnet which means that the block time is back to the previous level and miners’ income has returned to the levels before the 2nd of May 2022 (before the last difficulty bomb activation).

If you have any questions please contact us in Telegram chat where you can always find up to date information.

I
Ivan is the author of this solution article.

Did you find it helpful? Yes No

Send feedback
Sorry we couldn't be helpful. Help us improve this article with your feedback.